In addition to the "standard" range, Balblair has launched a few limited editions, such as the Balblair1992 Peaty 61%.

Note: Balblair is considered as one of the most attractive of the small distilleries still existing.

The history of Balblair is incomplete and might differ between the “official” Balblair story. It has been written by compiling the information provided by all the references mentioned at the end of this document.

The official establishment (foundation) date of the distillery was 1790 by John Ross, although the first known records of a Balblair distillery date of 1749 with a Mr Simson. Not much is know about the earlier years of the distillery. The distillery was the property of McKeddy in 1798 and then, John Ross took over until 1817. James Harper then owned the distillery until 1819. Between 1819 and 1824 the ownership is unknown. In 1824, John Ross and his son Andrew were its owner. In 1825 the distillery operated under the name John Ross & Co. In 1831, Andrew took over from his father and the company name was changed to Andrew Ross & Co. When Andrew left the distillery to work at Brora in 1833, John managed the distillery until Andrew came back in 1836. Andrew was joined by his son John McGhilchrist Ross and operated the distillery together until 1864. Then, John McGhilchrist left to work at Teaninich and set up his own distillery at Glenskiach in 1896. Andrew Ross and Andrew Ross Jr (the son of Andrew Ross and grandson of John Ross) operated the distillery until 1872, when the original distillery was uprooted and moved half a mile to the bedside of the newly constructed Wick-Inverness railway line. In 1873, after the death of his brother Andrew Ross Jr, James Ross joined his father Andrew in the business. Alexander Cowan takes a 60-year lease on Balblair and the distillery is rebuilt in 1894. The distillery stops production in 1911 and closed in 1915. The last whisky is taken from the Balblair warehouses in 1932. During the Second World War, Balblair distillery was used by the army commandeers and the army built a concrete floor in warehouse 4, and used it as a kitchen. All the other warehouses, except cellar 3 have beaten-earth floors. The distillery is taken over in 1948 by Robert James “Bertie” Cumming and Son, solicitors from Banff and owner of Pulteney distillery and the production is resumed in 1949. Two washbacks and a new boiler house were added in 1964 and the number of stills increased from two to three. The distillery is sold to Hiram Walker of Ballantine’s whisky in 1970. In 1978, the railway arrived, bringing coal and barley, after the floor maltings have been closed. In 1988, Hiram Walker merged with Allied Vintner to form Allied Distillers. In 1996, Inverhouse bought Balblair distillery. With the recognition of the quality of the 33 YO Balblair whisky (bottled since 2000) and 38 YO Balblair (2004), Global sales increased by 25%. On October 30, 2006, Inverhouse is bought by International Beverage Holdings (InterBev), the international arm of Thai Beverages. The capacity of production is about 1.4 mio LPA. In 2011, the visitor center was inaugurated. 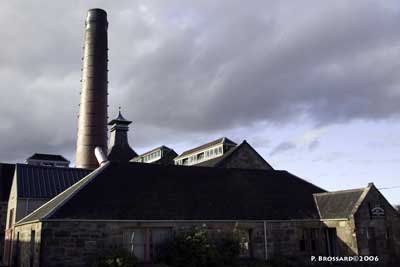