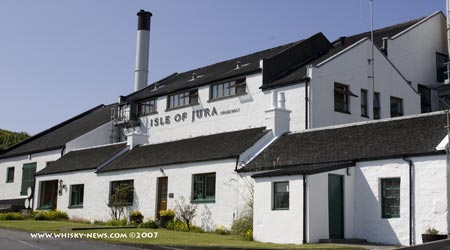 History of Isle of Jura Distillery

The distillery is said to have been built in 1810 by Laird Archibald Campbell near a cave where illegal distilling had been carried out possibly from the 1600’s. In 1831, the distillery was registered under the name of William Abercrombie. One year later, in 1832, the ownership passed to Archibald Fletcher. In 1952, J. & A. Gardner took over the distillery for about a year, before Norman Buchanan acquired the distillery in 1853. J.K. & D. Orr owned the distillery between 1867 and 1872, and when the partners retired, it was taken over by James Ferguson & Sons and rebuilt in 1876. In 1901, the Fergusons left Jura because of a dispute with the laird. No information about the distillery are then available. During the Great War, it was abandoned and left to decay and the roofs were later removed to avoid paying rents and it became a ruin. In the 1958, Robin Fletcher, the owner of Ardlussa Estate and Riley-Smith owner of Jura House and Ardfin Estate, got together to see if they could restart the distillery and provide work to the islanders. They raised financial backing eventually, mostly from Scottish and Newcastle Breweries, to build the distillery and rebuilt the distillery between 1960 and 1963 under the name Jura Distillery Co. Ltd, controlled by MacKinlay McPherson Ltd, subsidiary of Scottish Newcastle Breweries Ltd. The distillery was rebuild with the help of the architect Delmé-Evans on the site of the old distillery. It was decided to change the style of the whisky from a heavily-peaty/peaty to a lightly peated whisky and for producing a lighter spirit,  tall stills were created. On April 26th 1963, spirit ran through the stills for the first time. The number of  stills was increased from 2 to 4 in 1978. Scottish Newcastle Breweries Ltd was taken over in 1985 by the Invergordon Distillers group. In 1993, Whyte & Mackay (JBB Europe) acquired Invergordon Distillers. Whyte and Mackay was subsequently sold to Kyndal in 2001. In February 2005, Vivien Immerman bought Whyte and Mackay before selling it to United Spirit (part of the United Breweries group) in  May 16, 2007 for £595 million.