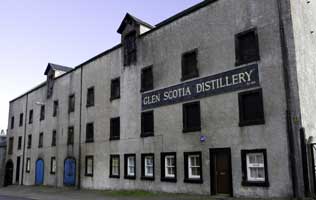 In 2013 was launched a serie containing the followign bottling:

Few  Glen Scotias whiskies have found their way to independent bottlers. Amongst them, there is a Glen Scotia 1974 from Signatory, Glen Scotia Mission 1975 from Murray McDavid and a Glen Scotia 1990 from Gordon and Macphail. The oldest cask stored in the warehouse dates from 1989 (status May 2006). Since 1999, Glen Scotia is now producing a small amount of peated spirit (15 ppm) and the first bottling was released in 2006 for the Whiskyfair.

Glen Scotia, with Springbank and Glengyle are the only distilleries left in Cambpeltown. At the turn of the 19th and 20th century, Campbeltown peaked at 34 distilleries.

Glen Scotia (Scotia distillery)  was originally built in 1832 by the Dean of Guild Stewart and Provost John Galbraith, although 1835 is the date of foundation mentioned in the labels of the distillery or 1837 on some official correspondence. The distillery will remain property of Stewart Galbraith until 1895, when Glen Scotia is sold to Stewart Galbraith & Company Limited. In 1919, West Highland Malt Distilleries ltd bought the distillery. The company bankrupted in 1924 and one of its directors, Duncan MacCallum took it over. He was forced to close the distillery for bankruptcy during the prohibition period, in 1928 and committed suicide in 1930 by drowning himself in the Campbeltown Loch. Since then, it is said that MacCallum ghost is haunting the distillery. This story became quite popular and a song was written. In 1930, the Bloch brothers took over the distillery and became a registered company in  1941 as Bloch Brothers Distillers Ltd (who owned Scapa in Orkney). The distillery was closed between 1928 and 1933. In 1954 Hiram Walker took over the group and sold it in 1955 to A. Gillies and Co., which became part of Amalgated Distilled Products Ltd in 1970. Between 1979 and 1982,  £1 mio was invested for upgrading the distillery. Two years after the updgrade, in 1984, the distillery closed. In 1989, Gibson and Co took over Amalgated Distilled Products and restarted the production. Glen Caterine Bonded Warehouse Ltd took over in 1994 and mothballed the distillery until 1999, when production  was resumed by the neighbouring Springbank Distillery staff. In May 2000, Loch Lomond Distillers took over the production. The production in Glen Scotia is currently of 100’000 LPA (capacity 1’000’000 LPA) and all the spirit is stored in one warehouse (6900 casks). The other warehouses are currently empty. By comparison, the production was recorded as 386’000 LPA in 1885. In 2014, Exponent Private Equity took over the Loch Lomond group.