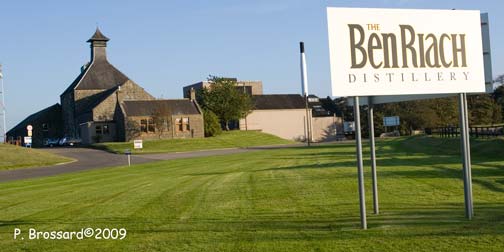 The range is now expanded with the 'Peated Wood Finishes' and the 'Wood Finish Series', in addition to 'Limited Releases' (single cask bottlings).

Benriach was founded in 1898 by John Duff under the name Longmorn, although it was referred locally as Longmorn 2. In 1900, the distillery was registered under the name Longmorn Distillery Co. Ltd. Following the Pattison's crash in 1900, the distillery was mothballed until 1965. However BenRiach’s floor maltings remain in constant production during this period, providing malted barley for the fully operational Longmorn Distillery. The distillery was completely refurbished in 1965 under the ownership of Glenlivet Distilleries Ltd. and reopened in 1966. The name of the distillery is changed to "Benriach-Glenlivet" in 1975. Glenlivet Distillers Ltd, including BenRiach distillery, is purchased in 1978 by Seagram Ltd. In 1983, due to a shortage of Islay malt for blending, production of heavily peated barley was started. In 1985, the number of stills is increased from 2 to 4. In 1999, the distillery operated only 3 months and the floor maltings are closed. On 19th December 2001, Pernod-Ricard took over Seagram and mothballed BenRiach in August 2002. Pernod-Ricard sold BenRiach in April 2004 to PR Brand Intra trading, a consortium consisting of Billy Walker and South Africans Geoff Bell and Wayne Keiswetter. The first distillation under the new ownership started on the 20th September 2004. Since 2004, there has been a continuous production of peated malt (10%) and non-peated malt (90%). Floor maltings were put in operation again on the 5th November 2012. On April 27 2016, Brown-Forman annouched the acquisition of the BenRiach Distillery Co. for $416 million.