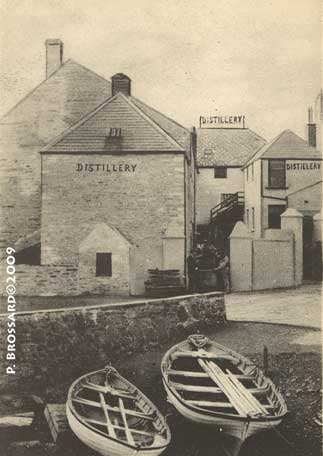 Stromness distillery was built in 1817 by John Crookshanks. Later, in 1821, it was registered under the name of Harry Crookshanks and then Hector Munro from 1825 to 1832. Harry and Margaret Crooshanks took again over the distillery until at least 1837. John Sinclair owned the distillery from 1852 until 1867. In the mid-1860s it fells in disuse and was bought in 1878 by the MacPhersons brothers who restored it and renamed the distillery "Man o' Hoy". Between 1900 and 1910, it was acquired by J&J McConnell Ltd and was transferred to their subsidiary in 1915 under McConnell's Distillery Ltd, London. The distillery closed in 1927 and dismantled in 1940.

Of note, according to A. Barnard, the distillery was built in 1827 by Hector Munro and the whisky was known as the "Old Orkney Whisky [OO]".

From A. Barnard: "It is planted at the foot of a steep hill" and was built in the year 1828 by Hector Munro, and covers about half an acre of ground. The water used for mashing and distilling comes from a hum, having its source in the hills rising between the Distillery and the celebrated Black Craig.

The following is a brief description of this, the most remote Distillery in the kingdom. It is built in the farm of a parallelogram, and enclosed by substantial stone walls. There are three Barley Store Rooms, and two others for Malt. The Kiln is floored with metal plates, and heated in the usual war by a fire, wherein peat only is burned. In close proximity is the Mill, containing a pair of metal rollers for crushing the malt. In the Mill Store, which combines a Mash House, are the Heatings Copper and the Mash Tun, a vessel, 10 feet in diameter and 5 feet deep, with a large tank underneath it, used as an Underback. The Tun Room contains four Washbacks, each holding 2,200 gallons, fixed on solid blocks, a Wash Charger with a capacity of 1,100 gallons, and three Receivers suitable to the requirements of the above vessels (…) There are two Bonded Warehouses, containing, at present, nearly 300 casks of Whisky. The Malt is crushed by bath water- and steam power, the waterwheel being 9 feet in diameter. The steam-engine is of 12-horse power, and by means of shafts stretching allover the place, can be made to do almost all the Work of the Distillery.

The Whisky, which is Highland Malt, is principally sold in Scotland, where there is a good demand for it, and the annual output is 7,000 gallons. Mr. Samuel Watson is the Excise officer."