Contribute(d) to the following blends: Glen Extra. Note: Does not contribute to the Campbeltown Loch blend. 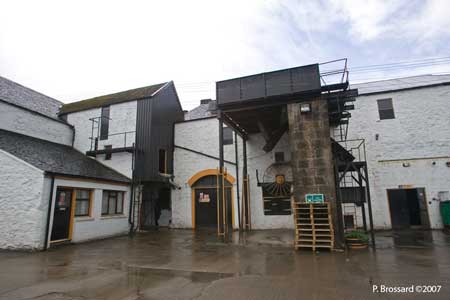 Of note, Springbank is the only distillery where the entire process is conducted on site from floor malting to bottling. Several distilleries, such as Balvenie, have floor malting operations, but all the malted barley used at Springbank is 100% produced on site.
Springbank distillery is producing three different types of single malt whiskies: Springbank, a medium peated whisky produced using a partial triple-distillation, sometimes named as 2.5 distillation, Longrow, a heavily peated whisky double-distilled, and Hazelburn since 1997, a lightly peated and triple-distilled whisky. Longrow was first produced in 1973-4, then for a short period in 1987 and finally since 1989, it is produced every year. The distillery is still owned by the original family.

The Reid family, in-laws of the Mitchells, established Springbank distillery in 1828 on the previous illicit site of Archibald Mitchell, although no reference in Excise returned. Until 1837, the distillery was registered under the name of William Reed Jun. & Co, who sold it to John & William Mitchell. The distillery operated between 1852-60 under the name J.W. Mitchell & Co, before it was changed in 1867 to J. & W. Mitchell & Co. In 1878, the name was recorded under J. A. Mitchell (John Mitchell and his son Alexander), when William left. In 1881, the distillery became a limited company as J. A. Mitchell & Co until 1891, when it got dissolved and reconstructed as Alexander Mitchell. It was then incorporated as J. & A. Mitchell & Co in 1897, who are still the owners. The distillery was closed during the WWI and WWII, in 1926-35, in 1980 and most of the time between 1981 to 1989. In 1992, Springbank decided to restore the floor malting. Springbank acquired most of the buildings of the adjacent Longrow distillery, with one Longrow warehouse used as a warehouse and a second warehouse used as a bottling plant.  The Springbank cark park is the proper location of the Longrow distillery. In 2008, the distillery was closed for a short time in order to start the production of a batch of locally grown barley.