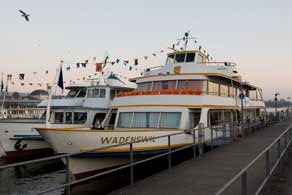 I have always attended the Whisky Ship on Saturdays (see previous report) in order to spend as much time as possible at the event as well as attending to masterclassess.

However, this year my only option was the Thursday, the opening  day.

Finally, I turned to be quite positive:

- From 16h15 (opening time) until around 18h, most people are still at work, so you can move around the stands quite freely.

- The bottles are all available, full, and just opened

- And if you want to buy bottles, the stock of the retailers is also full. Quite often, the best whiskies are sold out before the end of the event.

Since this was the 10th Anniversary of the whiskyhip,  tastings of water, chocolate, spirits and coffee was available, on top of the whiskies, of course!

Due to time constraints, I contended myself with the whisky section of the event.

Amongst the VIP which I recognized on the ships that day were: Frank McHardy and Peter Currie from J. A. Mitchell and Co ("Springbank") and Lynne McEwan from Bruichladdich, both at the stand of Lateltin, John Urquhart from Benromach and Gordon & MacPhail, the distillery manager of Pendery at the Smuggler, Trisha from Benriach/Glendronach at Best Trade Trading and for the first time, Michael Heads from Ardbeg at Monnier. I might have missed a few and more were to expected over the following days.

The program of the event can be found at http://www.whiskyship.ch/.

My first stop was at Paul Ullrich, back after a few years of absence.

The week before the whisky ship, I attended a tasting and a master class organized by Paul Ullrich at one of their Basel shop, where over 70 malts were available for tasting. The master class (conducted by Prof. Schobert) included 9 whiskes aged over 20 years. At that tasting, the Glen Elgin 1978 30 YO and the Ardbeg 1999 9 YO, both from Adelphi, caught my attention (or my palate). Since I knew that the stock of Ardbeg would be sold out before the weekend, my first stop at the event in Zürich was to make sure that I would have at least one bottle to take back home with me.

The next stand was one floor up, at Lateltin, where I tasted my first whisky: the Springbank 1996 Single Cask bottled for Lateltin, the Swiss importer. This bottle was already sold out in many Swiss retailers and after tasting it, I understood why. Even better than the Vintage 1997 batch 1. Further down, I went for two Murray McDavid Mission bottlings, the 1965 Glenglassaugh and the 1973 Teaninch. The Teaninch was most pleasant and spicy, while the Glenglassaugh was more disappointing. Something to do with the Riversaltes finish? Next was the new Bruichladdich 2001 in its matt greenish bottle. Previously, during the Feis Ile in 2007, I had tried a samples of Bruichladdich distilled the same year. At the time, I had been somewhat disappointed, and was therefore positively surprised by the bottling which I tasted in Zürich. A peaty version of Bruichladdich, mineral and on ashes combined with a surprising maturity. Very good!

On the other side of the boat, I engaged in a conversation between Peter Currie and Peter Hofmann. Peter Hofmann, the owner of the Angel's share has recently published a Whisky Encyclopaedia (in German): a huge encylopedia on whisky, with high quality photograph at a bargain price (a full review will be posted, once I am done with the text, i.e., which will be in a few weeks). Discussions have been initiated for a French and an English version. At Angel's share, I tasted most of the Berry Bros & Rudd, Glenrothes and Glengoyne range at different events, so I went for a James McArthur Bruichladdich 1998 20 YO, a Bruichladdich more intense and at least as good as the latest releases of that age.

At the World of Whisky, the choice was big as always. My first choice was the Clynelish 1983 25 YO 46% bottled for the 25th Anniversary of the Waldhaus am See, a correct Clyenlish, but lacking some punch. On the contrary, the Port Ellen 1982 26 YO from Signatory was very good, peaty, maritime and pungent… and more interesting than the latest Annual Release.

At Monnier, most of the range was similar to the products presented at the latest Whisky Schiff in Lucerne. Based on the recommendation of the staff, I tasted the Strathisla 1960 50% from Gordon & MacPhail bottled for La Maison du Whisky. Simply one of the best Strathisla I ever tasted: very intense and complex, on berries, no rubbery notes or tannic/woody. With Michael Head, I took the opportunity to discuss the "famous" Ardbeg Uigedail for Canada voted by Jim Murray as the Best Whisky in the World in his Whisky Bible 2009. Michael Heads confirmed that no special batches were bottled for Canada and that the Uigdeail tasted by Jim was the Uigedail 2007. At this stand, I met some friends, the Swiss Germaniac Lukas and his brother, who kindly provided me with a sample of the new Octomore Future 46% 2008 just released for the owners of the futures. Well, it is a very heavily peated whisky, rather young, sweet, and drinkable, but not extraordinary. It could have been kept a few years more in the cask.

At Acla da fans, the Laphroaig triple-wood had not yet arrived and was expected for the Friday. Anyway, they had plenty of whiskies to taste: Old Pulteney 1964-2001, Bruichladdich 1965-2001, Port Ellen 1982 19 YO sherry for alambique (all from the Old Malt Cask Range from Douglas Laing), Port Ellen 1979 Bothwell House, Caol Ila 1984 Strathblair, Tobermory 1972 OB Oloroso finish, Ardbeg 1972 13 YO for Sestante, and Mortlach 1969-1985 OB (?). At the exception of the rather thin Bruichladdich, all whiskies were remarkable.

With time passing (and money), I made my last stop at Michi's Welt. Their choice included mainly Douglas Laing and Blackadder. My last dram was the Royal Lochnagar 1977 from Blackadder, a very nice spicy dram.  I should not forget to taste more of their products at a next whisky ship!

Sometimes during that evening, I tasted the brand new Scapa, the Scapa 16 YO OB 40%, which will replace the Scapa 14 YO. Contratry to Longmorn, I found the new Scapa better than the previous one, although I still miss the older 12 YO.

Well, I had fun at the whisky ship in Zürich, tasted a fair number of whiskies and many were very good.

I bought a fair amount of samples (and bottles) during that Day, so you can expect to see tasting notes flowing over the next months on whisky-news.com.

Just be patient and savour the time !