During my last meeting with Frank McHardy, Director of Production at J.A. Mitchell & Co. Ltd, during the last Whiskyship in Zürich (December 2008), Switzerland, Frank kindly answered some of my questions: 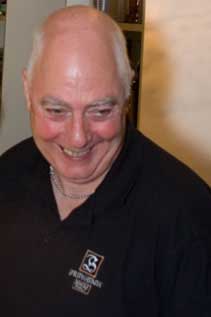 Frank: Springbank has always been my favourite distillery. The fact that you can control all the processes in house from malting of the barley to bottling the final product makes Springbank quite unique.

Whisky-news: You have worked in this Industry for 40 years. What have been the major changes for you?
Frank: I have actually worked within the industry for 44 years, started in 1963 at Invergordon. One of the major changes for me has been the fact that almost all the distilleries in Scotland are owned by a couple of companies. The other being the upswing in demand for single malts which is still continuing today.

Whisky-news: We hear quite often that the single malt distilled in the 1960 than today. What do you think about this?

Frank: The biggest single contributor to the quality and flavour of Whisky is the cask in which the whisky has been matured. In the old days there were a lot of very good Sherry casks available for maturation of Whisky but sadly this is not now the case. However Whisky companies are now investing heavily in having sherry casks manufactured in Spain then seasoned there, this has improved the quality of Sherry casks used for maturing Scotch Whisky. Now we all heavily depend also on the Bourbon casks coming from suppliers in The States. Overall I would say that, with the exception of selected casks, the quality of the whisky produced at present can compare with that which was produced during 1963 onwards.

Whisky-news: Amongst the whisky enthusiasts, there is sometimes a confusion between Springbank distillery, J&A Mitchell & Co and Cadenhead's. Could you shortly explain the difference.

Frank: We will be producing a new Longrow™ during 2008 . Longrow™ CV will be around 6 years old and will be bottled on a regular basis each year to produce around 5,500 x 6 packs at 46 % vol . This product has loads of sweet and smokey flavours and we are confident that it will sell well . Longrow™ CV should be available during Spring 2008 . Early in the year another Longrow™ from distillation year 2000 which has been matured for the last 18 months in Gaya casks will also be available as a " Wood Expression ".

Whisky-news: Over the last years, you conducted several experiments at Glengyle? When will we be able to taste the first whisky from this distillery? Is Glengyle running to your expectations?

Frank: We intend to bottle Glengyle at 8 years old so the first standard bottlings will appear during 2012. Glengyle is running very well on a limited production basis.
Whisky-news: Islay whiskies are quite popular now. Have you noticed an increased interest in Longrow?

Frank: There will always be a demand for peated whisky and we have seen a steady uptake in Longrow™ bottling . The new Longrow™ CV being around 6 years old has retained the smokey levels and we are sure that it will prove popular .

Whisky-news: What are the major markets for Springbank?

Frank: Major markets for our products include USA , Sweden and Japan . We are currently looking at India and China.

Whisky-news: In 2006 and 2007, the majority of the distilleries have increased their production. What about Springbank?

Frank: At Springbank we only distill for ourselves and 100 % of our production will be bottled by us in the future. We have steadily increased production over the past four years and are now at a level where Springabnk and Glengyle are either distilling or malting for 50 weeks of each year.

Whisky-news: At Springbank, the barley is malted for Springbank and Glengyle. If the production would increase, would you be able to malt all the barley on your malting floors?

Frank: Our aim at present is to always malt 100 % of the barley required for the two distilleries. The present production is geared to satisfy future case sales of our products.

Whisky-news: Talking about production, it is increasing, but some whiskymen are concerned about a new "whisky loch". What do you think?

Frank: I think that we will be in great danger of creating a " Whisky Loch " in years to come . If the present trend for production continues and perceived sales do not take place then in five years time we may be looking at a downturn in production.

Whisky-news: What are you going to drink for the new year?

Frank: I just happen to have a sample of the new Longrow™ CV and will be using that to wish all my friends and colleagues a Happy and prosperous 2008.