2007 was a busy year at the Feis Ile and all accommodations were fully booked in advance, as well as the different master classes and other events, many which got booked out before even being released on the Feis Ile website (islayfestival.org). Since the demand is so high for the festival, distilleries not only organized events during their open day, but also during the other days of the festival.

Lagavulin started the festivities, with stalls selling local products and local seafood. The Lagavulin fund raiser team had a display of photographs of the previous pillage and I had the chance to nose the last drops of the Celtic Pillage 2005 matured 2 years extra (the celtic pillage 2005 was a vatted malt whisky of the Islay distilleries and some malt whisky from Bushmill aged of a least 12 YO). The nose was impressive, extremely rich, full and much more complex than you would expect from a 14 YO whisky.  During the different tastings organized on this day, there was the possibility to try the Lagavulin 21 YO (to be released by October of this year, rating: 19/20) and the Lagavulin 1993 14 YO, 56.5%, the first official single cask (cask 4893) to be released (rating: 17/20). The 708 bottles were all sold very quickly, and although it was limited to 1 bottle per person, a Swede tried to purchased 20 cases (120 bottles). The day was cold, but very sunny and pleasant.

The Bruichladdich open day started with the First Cut of the new Port Charlotte Distillery  at Port Charlotte, by Lady Caroline MacTaggart and the Edmonton Pipe Band, during which some drams of Port Charlotte First Cut (rating: 16/20) were served to the audience. The next part of the Bruichladdich open day continued with the master class (£15), where we had the opportunity to try the first Bruichladdich distilled by the new team in 2001, a Bruichladdich 6 1⁄2 YO (10 ppm phenols). It was a light fruity (apples and pear), fresh and malty whisky, with a good balance, but quite immature. Bruichladdich is filling its casks at ~68% and this might explain that relative immaturity. The next one was the Bruichladdich 15 YO Duke of Edinburgh (rating: 16/20), followed by the X4, the quadrupled-distilled whisky, aged 10 months in a bloodtub (small cask of 20-22 L). In spite of very high strength, it was not spirity, but very spicy (vegetal condiments), fruity and with a strong sherry influence. The finish was oily, thick and very sherry (rating: 15/20).  The Bruichladich Redder Still 1984 was completely dominated by the red wine and haven’t enjoyed it (rating: 09/20). Then came the Octomore, an extremely peaty whisky. At the exception of dry peat and new make flavours, I haven’t identified much complexity in this whisky (rating: 11/20). In my opinion, the best whisky which could be tasted on that day was the new Bruichladdich Legacy 6, containing the whisky from a 1965 casks and some casks from 1970-71. Since the tasting was very long, I didn’t have much time to look at the stalls and listen to the music, but the day was very sunny and the music was very good. I completed the day by an improvised whisky tour of the distillery lead by Richard Joynson of the famous Loch Fyne whisky shop (located where?), in company of some well known whisky enthusiasts.

The morning started with a trip to Caol Ila to taste the new Caol Ila 2007 for the distillery, OB. This limited edition of Caol Ila will only be available at the distillery and the outturn is 2000 bottles. It is made from Caol Ila matured in ex-bourbon and ex-sherry cask.

Following this nice start of the day, it was then time for me to drive to the Open Day at the Port Ellen Maltings, where I attended the tour of the maltings and the master class with Peter Campbell. The Maltings are now working at full capacity and have managed to secure barley supplies from Scotland and England. However, the cost of barley have increased dramatically during the last 12 months due to poor crop (pre-germination). The price of barley has therefore almost increased of £100 per tonne. This will probably have an impact on the price of the whisky in the short term. On Islay, the distilleries have another problem: oil supplies. The new oil terminal at Bruichladdich is not fully functional and oil supplies are not guaranteed for the next weeks. This is bound to cause problems for the production of whisky on Islay. The event at Port Ellen was nicely organized and very nicely priced: £15 for the tour, the master class, some food (venison sandwich. Yum!), two drams of Port Ellen 6th Edition and two “normal” drams. In my opinion, this was the best value-for-money tour, and very informative too.

Time for the Laphroaig Open Day. The shop was very busy selling the new Laphroaig 1989 Feis Ile bottling (17 YO, 50.3%, £50). A great number of tours were organized as well as a few masterclasses (tasting of the 30 YO or the 10 YO, 15 YO and Feis Ile Laphroaig), but it was relatively quiet on the outside, since no special animations (e.g., music) were organized. Of note, the start of the work of the new visitor center at the distillery was scheduled after the Feis Ile. After this tour, I hiked to the Loch Uigedail starting from Ardbeg distillery. It is a nice walk of some 2-3 hours back and forth over the moors. On the way one has to pass the ruins of the 18th century village Solam, which was haunted by the plague in the late 18th century. Loch Uigedail is one of the water sources for Ardbeg distillery.

At Bowmore, I attended the master class held by Iain McCallum, one of the youngest master blenders in the whisky industry, if not the youngest ever. The presentation was clear and was the most scientifically orientated I have attended. I appreciated it very much, since it offered a new approach to whisky tasting. The whiskies served were the following ones: the new make, the Bowmore Darkest 15 YO, the new Bowmore 18 YO, the Bowmore 16 YO Port matured (to be released in January 2008), and the new special bottling for the Feis Ile, the Bowmore 7 YO Feis Ile Fresh Sherry cask 57.1%, which was to my opinion the best Bowmore of that master class. I recently tasted the new 12 YO and was very positively surprised by its quality. If you haven’t tried a Bowmore recently, it could be worth revisiting the new range.

I drove then to Bunnahabhain in the afternoon for the maturation talk with John McLellan, the distillery manager. During almost 2 hours, we have an interactive discussion about whisky maturation with John, as well as the opportunity to taste some great Bunnahabhain straight from the cask. The first whisky was a 4 YO Bunnahabhain from a sherry cask, followed by a gorgeous sample from the cask 1104 distilled in 1977 and finally a Bunnahabhain 1971 ex-bourbon, Cask 2215, from the sister cask of the cask used for the 125th Anniversary of Bunnahabhain. To finish off the day, I enjoyed the music at the Islay Brewery Open Day. There was a brassband of local youths playing and it was possible to visit the Brewery as well as some of the shops that are located there and to get a bite to eat.

The morning started bright and early so that I could catch the ferry to the Isle of Jura and the Open Day of the distillery there. Willie, the brewer of the Isle of Jura distillery, has been promoted distillery manager, after the departure of Michael (Mickey), who now works at Ardbeg. Willie was our tour guide for the visit of the distillery, before going to the traditional blending class, with the famous master blender of Whyte & Mackay, Richard Patterson. We concluded the first part with the whisky of the Jura Loundge, reserved for the Jura Fellowship. The visit of the Loundge was conducted by the other Willie, Willie Tait, the brand ambassador of Jura and we got a dram of the new limited edition of the Isle of Jura Heavily peated 7 YO, Crinan Classic Boat Festival (cask 24, rating: 16/20). After a copious lunch consisting of grilled pig meat (a whole pig had been turning since before dawn) and the results of the blending competition, we had the opportunity to taste the new limited edition, the Isle of Jura 1988 Dalmé-Evans, named after the architect, who rebuilt the distillery in 1962.

After a short walk on Jura out to a lonely standing stone, I headed towards Kilchoman for their Open Day, where Dr Swan was giving an interesting presentation about whisky maturation in the warehouse N°1. It was very pleasant to see, that the number of casks has nicely increased in the warehouse and very soon, a new warehouse will be needed for the future stocks. Next year, we might have the chance to taste the first Kilchoman whisky.

In the evening, I was invited by the Lindores Team for the Flaming Lobster evening, where we had the possibility to taste some beautiful whiskies, including a superb cask sample of a Bowmore 1971. Other beautiful whiskies were a Bowmist from Sherrif, a Clynelish 5 YO pre-1970, as well as a Glen Grant 1959, a Longmorn, an Old Pulteney, several old OB Ardbegs, and many other old top class single malt. Unfortunately, I had to leave that great evening for the midnight tour at the Laphroaig distillery, where we were supposed to taste the new Laphroaig 25 YO (mix of bourbon and sherry casks). Since the bottle did not make it on time for the festival, we instead tried a 18 YO cask sample and a 23 YO cask sample (from the oldest cask).

The day was very long, very intense, but great and I could do it all again at any time!

In order to be able to get one bottle of the excellent Bunnahabhain bottling for the Feis Ile (although not cheap: £95), I got up quite early to leave for the distillery shop. I was lucky to get one. Before spending the afternoon in Ardbeg, I enjoyed a walk in the forest at Bridgend where there is a nice road made with contributions from the EU. Quite refreshing to walk close to a stream with meadows and cows around after a long day. During the manager’s tour at Ardbeg, we had some drams of Ardbeg 1990 Airigh Nam Beist, Ardbeg Mohr (the new Ardbeg 10 YO in the 4.5 L bottle), a 1998 Ardbeg from a toasted cask and a sample from a 1999 Ardbeg Bordeaux matured. The Bordeaux matured was apparently a favourite of the new distillery manager, Micheal Heads. It was very smooth and the Bordeaux sweetened the dryness of the Ardbeg whisky, at the cost of some loss in complexity (rating: 15/20). The Ardbeg toasted cask was very pleasant, rich and mellow, with aromas of burnt sugar and vanilla (rating: 16/20). We have also been informed that the poor quality of the barley means that the yield of alcohol will be lower by a few percent as compared to the previous year. During the last past years, Ardbeg has initiated some trials with new types of woods, and casks of Ardbeg matured in Madeira cask were noticed. In 2007 some new wood casks were filled. Mickey was very open to any question during the tour. I am convinced that the distillery is in good hands.

After the tour, I headed towards for the Bunnahabhain Ceilidh, a traditional get-together Gaelic gathering, where we enjoyed very much the fine music and other entertainments.

I started the day early with the Ardbeg Breakfast tour at 7.00 AM. The tour was similar to the Manager’s tour, where the Ardbeg 1990 was replaced by the Uigedail and the Ardbeg 1975 Single Cask 1375. The tour was concluded by a copious breakfast. The day was quite cloudy, with occasional showers. It was the last event of the Feis Ile that I attended. 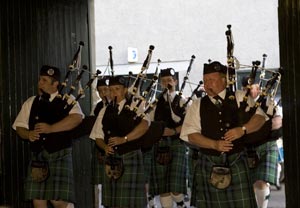