Ten days before the tour, I received an invitation for a 2-day tour visiting some distilleries owned by the Chivas group in company of the Master Distiller Alan Winchester and the Ballantine’s Master Blender Sandy Hyslop.  The invitation was rather of short noticed and while I asked some additional details, it turned out that I had to travel in UK that very same week. The decision was then quickly made.

After a smooth flight, I landed at Aberdeen Airport at the beginning of the afternoon. Although I know Aberdeen Airport rather well, after all my trips to the Speyside, I never stopped (excepted for traffic jams for driving South) in Aberdeen. After having dropped my luggage, I was time for a short visit of the Granite City.  From the big new mall at Union square, I had stroll direction the harbour, then to Union and King’s street.  Everything is grey: the pavement, the sky, and the buildings. No doubt, the city carries well its name. On a Sunday, with most shops closed, it is rather gloomy, but when moving back to Union Street and in the core of the city centre, then it becomes more lively and populated. After 4 hours spent downtown, it was time to get back to the hotel and to write my report about the Whisky Schiff Lucerne fair.

After a good breakfast, I am packing all my stuff to make sure to be on time for the meeting with the rest of the bloggers invited. Who else is joining? I have no idea. I only know that we will be visiting Glenburgie today and Glenlivet and Strathisla distillery tomorrow.
With some anticipation and curiosity, it is time to switch off the computer and to move towards the airport and let’s see what will happen.

I am now waiting for boarding at Aberdeen airport and finally found time to switch on my computer again. The 2-day stay In the Speyside is behind me. I am exhausted, but very pleased with my trip and a big thank you to Chivas Brothers for the invitation.
I was hoping to write my report and share the impression with you on an ongoing basis. Although the program seemed rather light with “only” 3 distilleries over 2 days, time ran very going quickly, without much rest. So let’s go back to Monday 28th at 10:15 and let’s see what happened afterwards?

Just left the hotel direction Aberdeen Airport and I am now waiting in the hall for the group. According the programme, Alex Robertson, Brand Ambassador should be waiting for us. At least someone I know (see Speyside Report). While waiting for him or anyone carrying a Chivas Sign, I took the opportunity of chatting with someone working for The Macallan. The distillery is working now in full production, not only in the new still house, but also on the renovated all still house. Regarding the closure of Tamdhu, I could not get clear reason, but according to this chap, this was done mainly to focus their effort on their core brands (e.g., The Macallan, Highland Park).
10:30 I identified our driver, shortly before Alex Robertson arrived, followed by a rather large party of British bloggers: Chris from www.edinburghwhiskyblog.com, Jim and Nicola from Whiskyboys.com,  Matt and Karen from WhiskyforEveryone, Joe and Neil from CaskStrength accompanied by Courtney from Chivas PR and her partners Kay and Grace.
Once all luggage are collected, time to drive to Keith for a lunch a Linn House, before departing for a short visit of one of the 40 warehouses, each with a capacity of 20 to 26,000 casks, of Chivas Brothers at Keith.

After this quick stop, time to move direction Inverness at the Glenburgie distillery, the most modern distillery of the Chivas group. I had the opportunity of visiting this distillery in 2009 (see Speyside report), but I really like this “open space” distillery, where all the different stages (mashing, brewing and distillation) are taking place under the same roof. During the visit we were joined by the Distillery Manager Neil (see Speyside report), who kindly answered all our questions, as well as explaining the functioning of the thermo compressors allowing a recovery of 40% from the energy needed to heat the stills. At the completion of the visit, we joined Sandy Hyslop, the Master Blender for Chivas Group, for questions and answers (Q&A) session, before participating to a short competition of blending, using a base of grain whiskies and 6 different types of malt whiskies, with the aim to recreate the Ballantine’s 12 YO. This type of exercise is always difficult and requires skill and expertise. I have attended to a couple of similar exercises in the past, but this made ever more difficult (and closer to the way of working for master blending), by mixing whiskies at cask strength using as a reference a Ballantine’s 12 YO diluted to 20% alcohol by volume (ABV).

The main task of the Master Blender is to make sure that consistency of the product over time. The packaging might change, as this was done in 2010 for the whole Ballantine’s range, but not the flavour profile. In order to ensure the long term consistency of their blends, Chivas is planning the filling of the casks 15 to 18 years in advance to ensure adequate supplies for the main whiskies for the future. This also includes fixing the proportion of bourbon and sherry casks. Since blends such as Ballantine’s are composed of approximately 40 different whiskies (malt and grain), more than the number of distilleries in their portfolio, Chivas must purchase whisky from competitors.  In order to ensure consistency in their products, they do not purchase matured whiskies from competitors but purchase new make spirit directly from them and filled them within the Chivas premises in their selected casks.  Since the production is planned well in advance, this would allow Chivas and his master blender to readjust the composition of his blends in case of changes of supplies (e.g., distillery closing or changing the character of its spirit). For blends, the composition is revised once a year to adapt to those changes.

As part of his work, Sandy is responsible for maintaining the quality and the consistency of all Chivas distillates from all the malt distilleries of the group, as well as of their Strathclyde grain distillery.

On Mondays and Tuesdays, with his “blenders associates”, as well as his operational staff (e.g., distillery managers) his evaluating the quality of the distillates of all the distilleries of the group by nosing blind the distillates reduced to 20% ABV in cobalt blue (opaque) glasses. Spirits are reduced to 20% to allow them to taste them more samples than if reduced to the drinking strength of 40% (i. e., not to overload the sensory system too quickly).  Ten glasses are prepared for each distillery, including 2 controls. The rest of the week, Sandy is nosing mature spirit, as well as the vatted products and the final bottled whiskies to ensure the quality at all the different stages of the production, from the distillation to the final bottled product. A question was asked regarding the Aberlour A’bunnadh, which is produced as batches. Batches allow the master blender some flexibility, since every batch is by definition different from each other. For this product, each batch might be slightly different, not only by its flavour profile, but also by its size. Casks are selected by Sandy and once his choice is made, the casks are identified, sorted and prepared for bottling. Presently, the batch 35 has just been released, but the casks for the batch 38 are already selected.
One of the biggest challenges for him is to ensure consistency in a product with limited supplies such as Scapa. This distillery closed for many years during the 1990s resulting in small inventory of various vintages. Therefore, ensuring a consistency in the product is very difficult.
This was the end of the “whisky education” part, and after a copious and excellent traditional Scottish dinner and a few drinks, it was time to a short rest.

March 29:
9:00 After some rest and the breakfast, it was time for the party to move to Glenlivet distillery for a meeting with Alan Winchester, the Master Distiller of the Chivas group, responsible for all the distilleries of the group.

The journey was quiet and a short walk to the site of the old John Smith Glenlivet distillery was welcomed by most members of our party. The night has been short for most of us…

The knowledge shown by Alan about the whisky history was rather impressive. This was followed by a tour of the Glenlivet distillery, starting with the new extension before moving to the oldest part. The contrast was striking.  Before leaving the distillery, we visited one of the warehouses of the distillery, where we were poured a sample of a Glenlivet 1979 duty paid cask. A charming well mellow Glenlivet, rather nutty, on raisins, dark fruits, orange and tobacco leaves, gaining in complexity once the whisky was slightly warmed by our palms. Once the glass emptied, it was time for a welcomed quickly consumed lunch in the town of Aberlour.

Our final visit took place at Strathisla distillery, the fingerprint and spiritual home of Chivas for tasting the Strathisla 12 YO and most of the Chivas Regal range (12, 18, and 25 YO). These deluxe blends are well crafted, rich, soft and mellow. Used to taste malt whiskies, mainly bottled at cask strength, I found the Chivas regal slightly thin and light, thinner and lighter than the Ballantine’s equivalent. The nose of Chivas 25 YO was very smooth and mellow, with an excellent fruity nose, with a rather noticeable aroma of old grain on the palate. I personally preferred the 18 YO, richer and more complex than 12 YO and more flavour intensity than the 25 YO. This tasting directed by Alex was followed by the visit of the picturesque distillery. This traditional distillery as more charm than the modern distillery, but the working condition in such compact distillery are more difficult.The visit ended up in the Chivas Royal Salute vault, where we had the privilege of tasting some Chivas Stone of Destiny 38 YO (or more) straight from the cask.

The whisky was most impressive, with rich and thick syrupy texture, combined with the sherry influence from an excellent sherry butt, as well as intense and complex flavours. The absence of reduction to 40 or 43% allows the aromatic richness and intensity to express itself at its full potential.  This blend was excellent, very well balanced and without any noticeably grainy-starchy influence coming from the gain whisky component. Once you have tasted this, one might wonder how would 18 or 25 YO Chivas Regal taste if bottled at a higher strength.
Over the last two days, I slowly lost the notion of time, as my report might suggest, absorbed at capturing as many information as possible and learning as much as I could from Neil, Alan and Sandy.

I wish to thank very much Chivas Brothers for inviting me to this highly educative PR trip, as well as at the staff (Sandy, Alan, Neil, Alex, Courtney and the others) for their availability and answering all the (non-confidential) questions. I also want to thank my fellow British bloggers and I invite you to consult their websites. 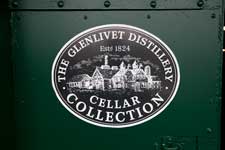