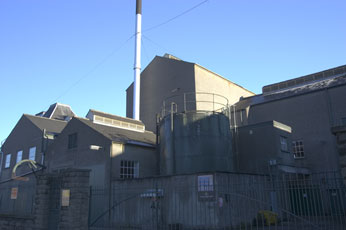 Regular Bottling:
Caperdonich has never been regularly sold as single malt. To my knowledge, only a 5 YO single malt (40%, 75 cl) has been released for the Italian market and as a 16 YO cask strength bottle (D: 1998, B: 2005, 50 cl) exclusively available through the visitor centres of the Chivas Group (Strathisla, the Glenlivet,..).

Caperdonich has been bottled by most independent bottlers, such as Hart Brothers, G&M, Douglas Laing, Duncan Taylor and Cadenhead's.

Caperdonich whisky was principally used in the "Chivas Regal", "Queen Anne", "Passport" and "Something special".

J.J. Grant who built the Glen Grant distillery built Caperdonich 1898. The same barley and water was used by the two distilleries an the two were linked by a pipe, known by the locals as the "whisky pipe". The distillery was closed between 1902 and 1965 in consequence of the Pattison's crash. The production restarted after the renovation achieved by its new owner, the Glenlivet Distilleries. As you can see from the picture above, the renovation had to be quite extensive. In 1967, the number of stills was doubled (from 2 to 4) and Seagram (the Chivas Group) took over in 1977. In 2000, Pernod-Ricard acquired Seagram and the Chivas Group and closed the distillery in 2002 with only 3 months of activity between 2001 and 2002. The distillery was demolished in autumn 2010.