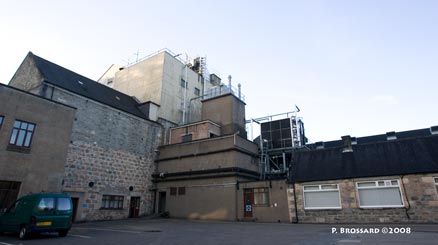 The Tamdhu distillery was build in 1897 by William Grant, Director of Highland Distilleries, with money raised from 15 other partners, including Robertson & Baxter. It was registered under the name Tamdhu Distillery Ltd and in the following year became the property of the Highland Distilleries Co. Tamdhu suffered from a closure between 1911-2, in 1925 and a long shutdown from 1927 to 1948. During the 1927-48 shutdown, a Saladin Box Malting was installed and started to operate in 1949. With 10 saladin boxes, Tamdhu is supplying malt to the other distilleries of the group (e.g., Glenrothes and Macallan).  In 1972, the distillery is renamed Tamdhu-Glenlivet  and the distillery expanded the number of stills increasing from 2 to 4. In 1975, two more stills were added. The distillery lost its "Glenlivet" suffix in 1988. The distillery was mothballed at the end of 2010 and purchased on 28 June 2011 from Edrington by Ian Maclosed for an undisclosed sum.